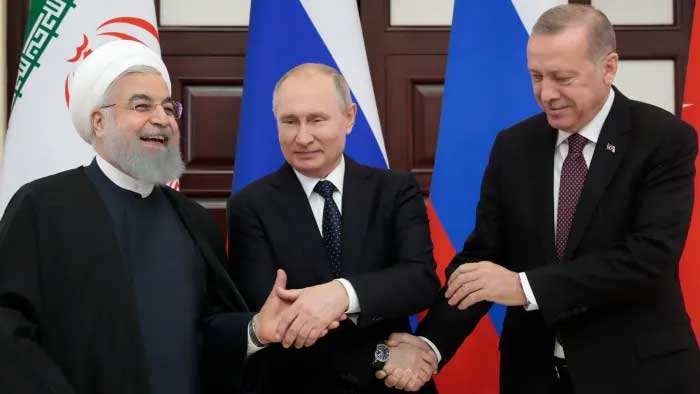 Online Desk : Russia, Turkey and Iran have agreed to continue cooperation aimed at eliminating terrorists of the Islamic State and Al-Nusra Front groups (outlawed in Russia) in Syria.
In their joint statement after the 15th international meeting on Syria in the Astana format, the sides “reiterated their determination to combat terrorism in all forms and manifestations and stand against separatist agendas aimed at undermining the sovereignty and territorial integrity of Syria as well as threatening the national security of neighboring countries.”

The sides also agreed to continue cooperation in order to ultimately eliminate DAESH/ISIL (formerly known as the Islamic State – TASS), Al-Nusra Front and all other individuals, groups, undertakings and entities associated with Al-Qaeda (outlawed in Russia – TASS) or DAESH/ISIL, and other terrorist groups, as designated by the UN Security Council, while ensuring the protection of civilians and civilian infrastructure in accordance with international humanitarian law.”

Russia, Turkey and Iran expressed concern with the increasing hostilities against civilians in various parts of Syria. The sides “reviewed in detail the situation in the Idlib de-escalation area and highlighted the necessity to maintain calm on the ground by fully implementing all agreements on Idlib.”

The three countries expressed serious concern with the increased presence and terrorist activity of Hayat Tahrir al·Sham (outlawed in Russia) and other affiliated terrorist groups as “designated by the UN Security Council that pose threat to civilians inside and outside the Idlib de-escalation area.”

Idlib is the only Syrian region, which is mainly under control of armed groups of Syria’s opposition and Al-Nusra Front. A northern de-escalation zone was set up in Idlib in 2017 to give shelter to militants from other Syrian regions who had refused to surrender arms.

The 15th international meeting on Syria in the Astana format (Russia, Turkey and Iran) is held in Russia’s Black Sea resort of Sochi on February 16-17. The previous round of Astana talks took place in Nur-Sultan in December 2019.