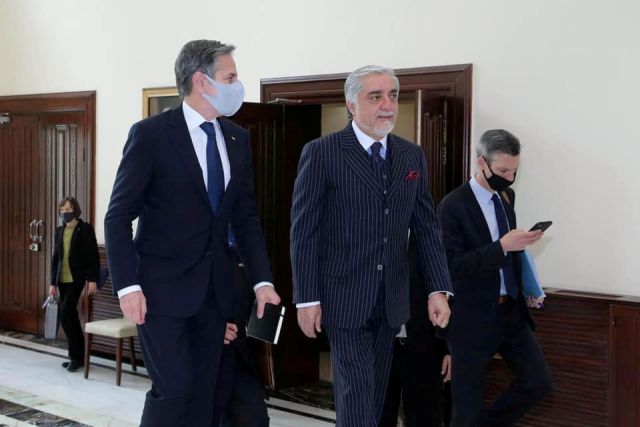 Online desk : U.S. Secretary of State Antony Blinken flew to Kabul on Thursday in an unannounced visit to show support for the Afghan government a day after U.S. President Joe Biden said that he was pulling out U.S. forces after nearly 20 years of war.

Biden acknowledged that U.S. objectives in Afghanistan had become “increasingly unclear” over the past decade and set a deadline for withdrawing all U.S. troops remaining in Afghanistan by Sept. 11, exactly two decades after al Qaeda’s attacks on the United States that triggered the war.

Foreign troops under NATO command will also withdraw from Afghanistan in coordination with the U.S. pullout.

Blinken, arriving in Kabul after attending NATO talks in Brussels, met with Afghan President Ashraf Ghani, whose government remains embroiled in fierce fighting with Taliban insurgents while a U.S.-backed peace process is shrouded in uncertainty.

The top U.S. diplomat tried to reassure Ghani that despite the departure of U.S. troops, the United States would remain committed to Afghanistan, saying Washington will “intensify” its diplomacy to do “everything we can” to advance efforts to secure a peace agreement between Kabul and the insurgents.

“The reason I’m here, so quickly after the president’s speech last night, is to demonstrate literally, by our presence, that we have an enduring an ongoing commitment to Afghanistan,” Blinken said at the embassy, according to a press pool report.

He was in Kabul for about eight hours.

The foreign troop withdrawals have raised concerns that the country could erupt in full-scale civil war, providing al Qaeda space in which to rebuild and plan new attacks on U.S. and other targets.

Later at a press conference at the heavily fortified American embassy, where earlier he had greeted U.S. soldiers, Blinken warned the Taliban that any attack on American troops as they pulled out would be met with “a very forceful response.”

Blinken also met with Abdullah Abdullah, the head of Afghanistan’s High Council for National Reconciliation, who expressed support for the U.S. decision.