Govt will spend any amount required to purchase vaccine: PM 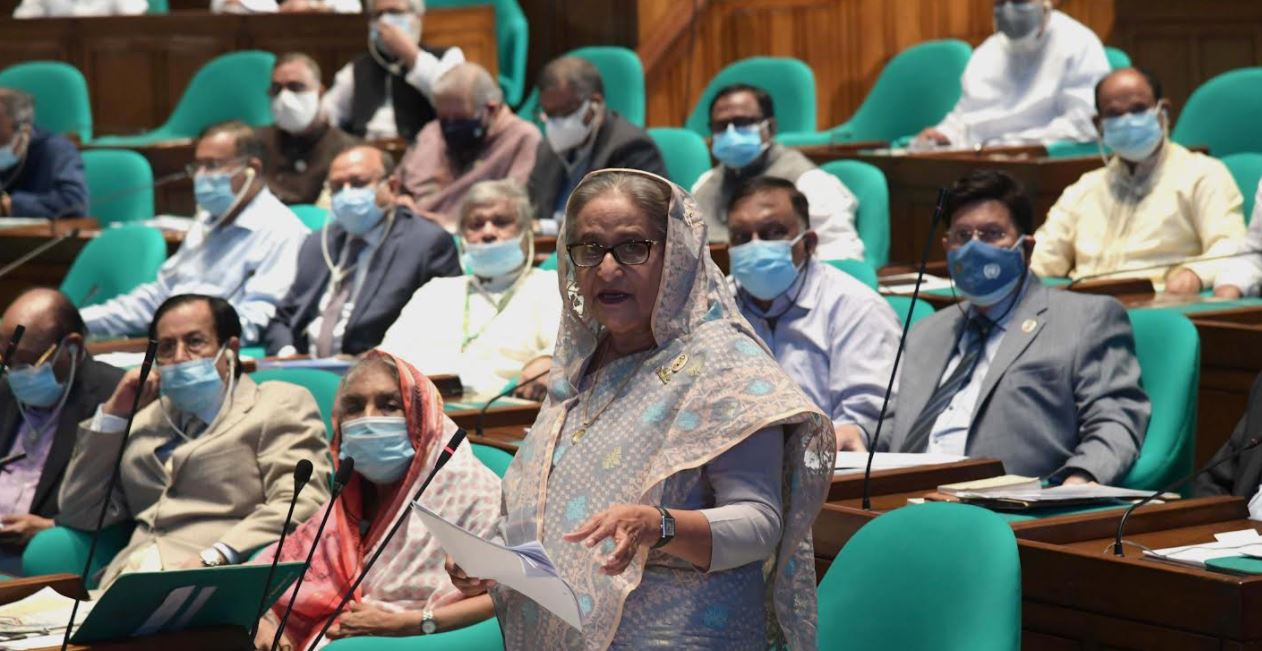 Online desk : Prime Minister Sheikh Hasina on Tuesday said the Jatiya Sangsad (JS) that her government will provide whatever money is required to procure the Covid-19 vaccines to bring 80 percent of the population under vaccination.

“We have announced to vaccinate all the citizens of the country free of cost. So, we will give the money whatever is required for collecting the vaccine of coronavirus,” she said, taking part in the general discussion on the budget as the Leader of the House in the 13th session (Budget Session) of the 11th Parliament.

Mentioning that Taka 14,200 crore has been allocated in the proposed budget to purchase the Covid-19 vaccines, the Prime Minister said that they have a plan to bring 80 percent of the population under the vaccination.

Stating that the students have been in pain due to closure of the educational institutions, she said, “The vaccination has already started among the students of colleges and universities. We will be able to open the colleges and universities upon its completion. Educational institutions at the primary and secondary levels will be opened if the Covid-19 situation improves.”

But classes of the students are going on through television, radio, community radio and online which makes it possible to teach over four crore students while the government has distributed textbooks free of cost among the students maintaining the health protocol and gave the money of scholarship and stipend through online transactions.

She said that the government has allocated Taka 14,200 crore in the budget to purchase the vaccine while they have so far collected 14.6 lakh doses of vaccines from multiple sources.

The Prime Minister said her government has made contacts with all the possible sources of the world for producing the Covid-19 vaccines and booked for those by giving money in advance when the World Health Organisation (WHO) even didn’t give its consent to any vaccine.

Bangladesh has temporarily caught in trouble in collecting the jabs as India has unfortunately stopped exporting the vaccine as the country has suddenly experienced a massive surge in coronavirus.

She added: “But, the problem is over with the grace of Allah as we have managed it.”

More vaccines will come in July as communication is going on with China, Russia and the United States, she said and hoped to start massive vaccination in the country.

The Prime Minister said that the government has asked the authorities concerned to vaccinate Bangladeshi expatriates on the priority basis so that they would not have to go into quarantine upon reaching their destinations.

As the second wave of the Covid-19 is still persisting, she said, adding the government has already allocated a special fund of Taka 10,000 crore to deal with any emergency regarding the coronavirus while the process of appointing 10,000 more physicians and nurses and collecting required machinery are going on to ensure quick healthcare services to the Covid-19 patients and for the purpose Taka 100 crore has been proposed to allocate in the budget.

The head of the government also said that her government has given Taka 104 crore as special honorarium to 20,500 physicians and nurses for rendering services to the Covid-19 patients from the forefront, she said.

The Prime Minister said she did not want to see any more deaths from the Covid-19 as she knew the pain of losing near and dear ones from the deaths of most of her family members including his father, Father of the Nation Bangabandhu Sheikh Mujibur Rahman on August 15, 1975.