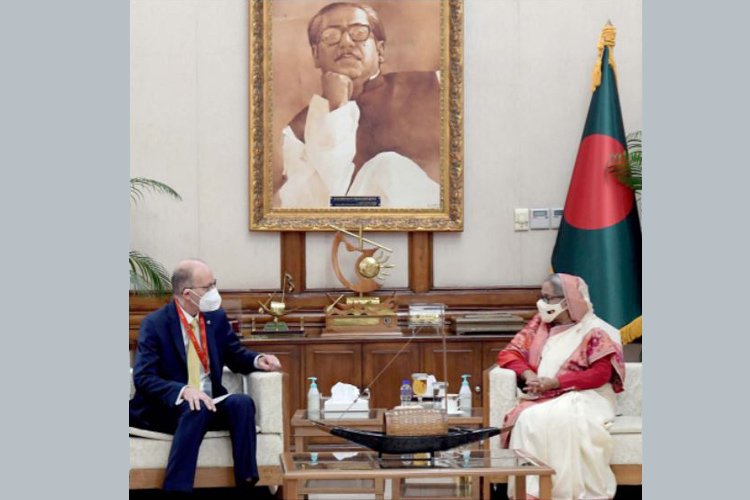 She made the suggestion when a Canadian delegation called on her at her official residence Ganabhaban, PM’s Assistant Press Secretary MM Emrul Kayas said, BSS reports.

Sheikh Hasina said the relations between Bangladesh and Canada began dates back before the emergence of Bangladesh on 16 December 1971.

She recalled with gratitude that when the Awami League led by Father of the Nation, Bangabandhu Sheikh Mujibur Rahman won absolute majority in the general elections held on 7 December 1970, the then Trudeau Government in Canada urged the ruling government in Pakistan to hand over power peacefully to the elected representatives.

“Canadian Government continued its support towards Bangladesh during our War of Independence,” she said, adding: “Canada was one of the first countries that recognized Bangladesh immediately after the independence (14 February 1972).”

The Global Institute for Food Security (GIFS) of Canada’s University of Saskatchewan (USask) opened its regional office in Dhaka last year in a bid to enhance cooperation in research among agriculture research institutes of Canada and Bangladesh. The delegation came here to visit it.

During the call on, Stephen Visscher said that they would provide all types of technical supports to the GIFS regional office located here.

Besides, Dr Balajit Singh said they will extend all out supports to them who will go to the University of Saskatchewan for higher studies.

Dr Andrew Sharpe said that he will guide the person who will go to University of Saskatchewan for higher studies.

The delegation also showed their interest to work on the multiple use of Bangladesh’s jackfruit and plant genetics.

Saskatchewan is known as the breadbasket in Canada where this University is located. It is one of the most prestigious universities both in terms of research and academic excellence.

BARC and GIFS, University of Saskatchewan have developed partnership in agricultural research and development by signing a Memorandum of Understanding on February 10, 2020.