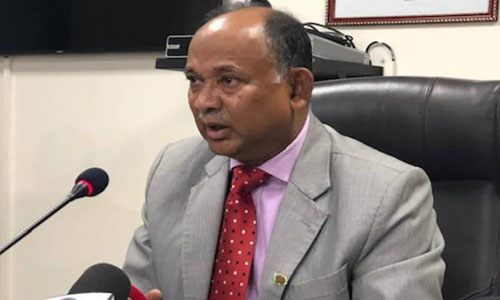 He stated it to reporters while speaking at a press conference at Rail Bhaban in the capital.

The Railways Minister also said a show-cause notice will be sent to Pakshey divisional commercial officer (DCO) in connection with the incident.

Nurul Islam Sujan said the TTE was directed to join work. “What my wife had done without informing me was not right. I’m really embarrassed of it.”

“I am ashamed of saying that I didn’t know the ticketless relatives of my wife. My wife was supposed to say if she had any demand regarding the railways. But, she shouldn’t have done it without telling me.”

“I’ve just married her only nine months ago. I don’t know all her relatives. However, the TTE misbehaved with the passengers while imposing fine on them. A complaint was also lodged by the passengers. I have heard that my wife also made a call to the DCO. She was not supposed to do all these things. I’m ashamed of it.”

The TTE’s suspension order came on Friday following his alleged misbehaviour with and fining three passengers, who were traveling ticketless and introduced themselves as relatives of the railways minister.

The incident drew widespread criticism and many demanded resignation of the rail minister.

Earlier on May 5, Md Shafiqul Islam, TTE in question working in Ishwardi (West Zone-BR), was suspended for reportedly being rude to passengers.

Railway sources said that the TTE misbehaved with three specific passengers – who introduced themselves as relatives of the railway minister.

But, Shafiqul Islam refuted the allegations.

Shafiqul said, “I did not misbehave with them. The passengers claimed to be relatives of our minister.”

“Out of respect and following discussions with my seniors, they were shifted to a non-AC berth.”

According to sources, three passengers boarded Sundarbans Express from Ishwardi Railway Junction Station on May 5 and were going to Dhaka in an AC cabin without tickets.

At one point, on duty Shafiqul asked for their tickets.

Instead of showing tickets, they introduced themselves as the minister’s relatives.

The TTE then fined and gave them three tickets for regular seats in a non-AC coach. The passengers had to pay around Tk 1,050 in total.

Later, they filed a complaint against the TTE in Dhaka.

Railway’s Pakshi DCO Nasir said he was informed that a TTE misbehaved with three passengers.

“Shafiqul was suspended after I was informed about the matter.”