Murder of college girl after rape in Joypurhat: 2 arrested 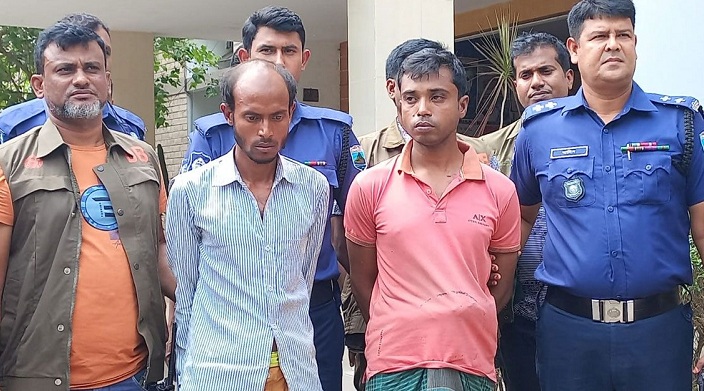 Online desk : Two accused have been arrested in connection with strangling a college girl with scarf after she resisted rape of her at Panchbibi upazila in Joypurhat district.

The accused were arrested from Majhina area in the upazila.

The arrested are Rony Mohanta, 30, of village Majhina and Kamini Jahid, 32 of village Aymara under Panchbibi upazila.

Earlier at about 8:00am on Saturday, the body of the student was recovered from the area. After two hours, the girl’s elder brother filed a rape and murder case with Panchbibi Police Station.

The police super said the victim hailed from Majhina under Panchbibi upazila. She was a student of Hons 1st year at a local government college. Her mother died several years ago and father has been in jail over the last one year being loan defaulter. The student used to live at her brother’s house in absence of her parents.

Her brother and sister-in-law went the brother’s father-in-law’s house on Wednesday, the next day of Eid, keeping her at home.

On the following morning, the two girls found that the room was locked from outside. Afterward, their mother came and opened the doors. They saw that the body of college girl was lying naked on her bed with a piece of cloth inside her mouth. Later, police arrived and send the body to Joypurhat Adhunik District Hospital for postmortem.

The SP said a scarf was found around the neck of the girl. It was assumed that the girl was strangled after rape.

However, the arrested two accused told police that they had entered the girl’s room taking advantage of the absence of her elder brother and his wife at home. Then they tried to rape the girl. As the victim resisted them, they tried to rape intimidating her. Then they forcibly put her pyjamas inside her mouth and fled away strangling her.

The SP also said it would be able to know whether the victim was raped and murdered.