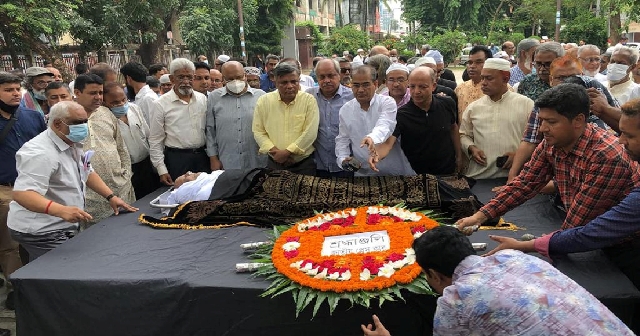 Online desk ; Journalists paid their last tributes to their fellow colleague and renowned lyricist KG Mustofa at the Jatiya Press Club in the capital on Monday.

Over a hundred media workers, former colleagues and friends of KG Mustofa gathered on the JPC premises to show their last respect to him as his mortal remains were brought there around 1:30pm.

Apart from journalists, people from different professions also paid homage to the veteran journalist by placing wreaths on his coffin.

Wreaths were also placed on his coffin, on behalf of different organisations, including JPC, BFUJ, DUJ, PIB and Noakhali Journalist Forum.

Earlier, his namaz-e-Janaza was held on the JPC premises.

KG Mustofa (84), the legendary lyricist of numerous evergreen songs from the golden era of Bengali cinema, passed away at his home in Azimpur at 8 pm on Sunday at the age of 84.

Another of his popular songs is “Aayna Te Oi Mukh Dekhbe Jokhon,” composed by Robin Ghosh and sung by eminent Bangladeshi playback singer Mahmudun Nabi. This song was used in the movie ‘Nacher Putul’ (1971) starring the popular on-screen duo Razzak and Shabnam.

In his esteemed career, KG KG Mustofa worked as a prominent journalist, columnist and poet. He was the editor of ‘Shachitra Bangladesh’ magazine.