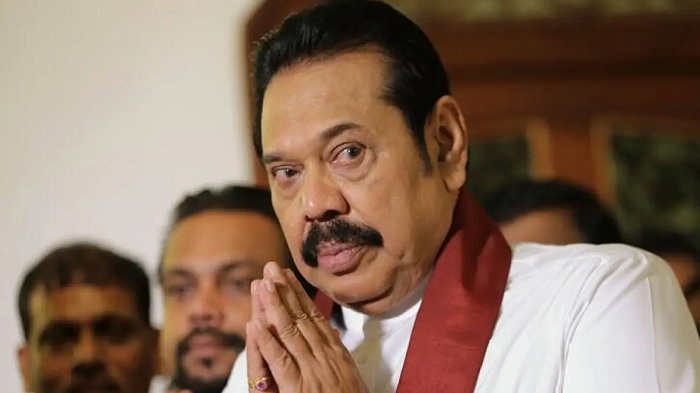 International desk ; A protest began in front of Sri Lanka’s Trincomalee Naval Base on Tuesday after reports emerged that former prime minister Mahinda Rajapaksa and some of his family members were there after leaving the official residence in Colombo, reports PTI.

Violence erupted in Sri Lanka on Monday after supporters of then prime minister Mahinda Rajapaksa attacked peaceful anti-government protesters demanding his ouster over the country’s worst economic crisis that led to acute shortages of staple food, fuel and power. Over 200 people have also been injured in the violence in Colombo and other cities.

Mahinda Rajapaksa, 76, resigned as prime minister on Monday amid unprecedented economic turmoil, hours after his supporters attacked anti-government protesters, prompting authorities to impose a nationwide curfew and deploy Army troops in the capital.

A protest has begun in front of the Trincomalee Naval Base after reports Mahinda Rajapaksa and some of his family members are there after leaving Temple Trees, the official residence of prime minister, the Daily Mirror newspaper reported. Trincomalee is a port city on the northeast coast of Sri Lanka. Mahinda Rajapaksa left his official Temple Trees residence early on Tuesday morning even as a mob tried to enter the premises.

Throughout the night on Monday, the police fired teargas shells to quell mobs trying to enter the Temple Trees residence. Meanwhile, a group of lawyers lodged a complaint with the police headquarters to arrest Mahinda Rajapaksa and his colleagues who had allegedly instigated Monday’s violence against peaceful anti-government protesters.

On Monday, the violence saw arson attacks on the homes of several politicians, including the ancestral home of the Rajapaksas in Hambantota. Video footage showed the entire house of Mahinda Rajapaksa and his younger brother and President Gotabaya Rajapaksa in Medamulana in Hambantota city was burning.

Mahinda Rajapaksa’s House in Kurunegala was also set on fire by protesters while a mob also destroyed DA Rajapaksa Memorial – constructed in the memory of the father of Mahinda and Gotabaya – in Medamulana, Hambantota.

There have been protests over soaring prices and power cuts since last month. Sri Lanka is facing its worst economic crisis since gaining independence from Britain in 1948.

The crisis is caused in part by a lack of foreign currency, which has meant that the country cannot afford to pay for imports of staple foods and fuel, leading to acute shortages and very high prices.