Triple murder in Kushtia: 3 sentenced to jail unto death 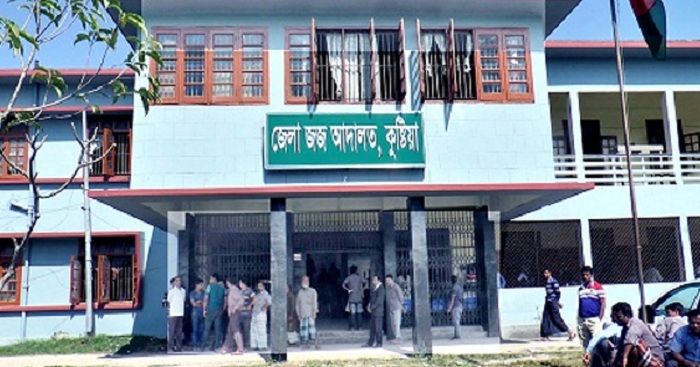 Online Desk : A Kushita court on Tuesday sentenced three accused to jail unto death while eight others to life imprisonment in a case filed in connection with a triple murder in 2009.

Those who got jail term unto death were Faruk Sardar, son of Askar Ali of village Putladanga, Kalu alias Kafil Uddin, son of Ishaque Ali Master of village Paschim Abdullahpur and Rohan, son of Kalo Majnu of Aryapara in Sadar upazila.

All of them were members of different outlawed parties.

The court also fined them Tk 25,000 each. All of them were tried in absentia.

According to the prosecution, police recovered the severed heads of three people—Shamsuzzoha, Quaiyum and Ayub–from DC Court area of Kushtia district town on August 10, 2009.

Later, police recovered the beheaded bodies of the trio from a field of Sonadanga village in Sadar upazila on the following day.

Quaiyum’s brother lodged a complaint against some unidentified people with Kushtia Islamic University Police and police registered an FIR after getting the complaint.

Investigation officer of the case submitted a chargesheet against 22 people.

They were killed over grabbing a tender of a project of LGED involving Tk 18 crore.

After examining the records and witnesses, Kushtia Additional District and Sessions Judge Tajul Islam handed down the judgment.

The court also acquitted eleven people as allegations brought against them could not be proved.