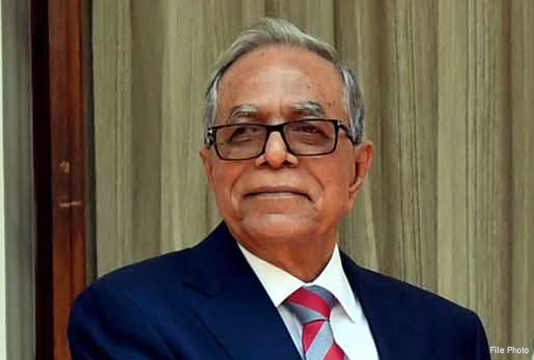 The head of the state made the suggestion while addressing a banquet hosted in his honour by President of Nepal Bidhya Devi Bhandari at Hotel Yak and Yeti last night.

“Expansion of trade and investment, establishing strong road, rail and air connectivity, boosting tourism and people-to-people contact are some of key areas where our two countries have immense potentials and must enhance cooperation,” he observed.

Noting that Bangladesh attaches high importance to its relation with Nepal, the President said, “Our two countries and our peoples are bound together by ties of history, culture and language.”

He expressed his heartfelt gratitude for the honour and the warm hospitality extended to him and his delegation since his arrival in Kathmandu, the capital of the Himalayan country.

Abdul Hamid said the people of Bangladesh always recall with deep gratitude the moral and material support extended by the political leadership and the people of Nepal in the War of Liberation in 1971.

The President said Bangladesh is ready to extend all support to Nepal’s development projects specially for fulfilling the vision “Samridhdha Nepal, Sukhi Nepali”.

Referring to ongoing development trend in Bangladesh, he said, “In fact, today, Bangladesh is showcased as a role model for socio-economic development. Our government under the dynamic leadership of Prime Minister Sheikh Hasina envisages to see Bangladesh as a ‘Middle income Digital Bangladesh’ by 2021 and as a developed country by 2041.”

The President hoped that Bangladesh and Nepal would be able to harness the existing synergies and their warm and friendly relations will be further consolidated.

“I also believe we will continue our traditionally close cooperation in multilateral and regional forums and work together for achieving common aspirations,” Hamid added.

Referring to the programnmes taken for the birth centenary of Father of the Nation Bangabandhu Sheikh Mujibur Rahman in 2020 and the Golden Jubilee Celebration of Bangladesh’s independence in 2021, the President said, “I look forward that the friendly people of Nepal will share our joys and happiness.”

Earlier, in her welcome speech, the Nepalese President said the two countries need to enhance cooperation at regional and international levels on matters of common concerns and interests in addition to the development and expansion of bilateral relations.

Bidya Devi wished for the good health and happiness of President Hamid and continued happiness and prosperity of the peoples of Nepal and Bangladesh.

People couldn’t get much benefit from microcredit: PM