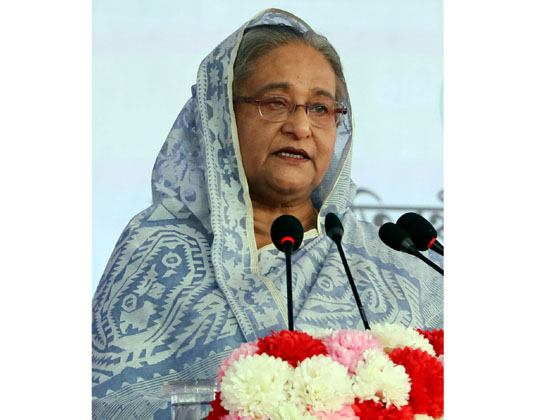 Prime Minister Sheikh Hasina today renewed her government’s determination to build a disparity-less society and urged the people to discard their “negative mindset” about the persons with disabilities.

“We were taught in the childhood not to call the blinds as blinds and the crippled as crippled. These teachings will have to be given to the children (from their childhood) because they (disabled) are all human beings and they’ll move together (with us) — it’s the biggest word,” she said.

Sheikh Hasina added: “We’ve to change our negative outlook about the persons with disabilities.”

The premier said her government wants to establish a disparity-less society in the country by fulfilling all basic needs for all.

“Father of the Nation Bangabandhu Sheikh Mujibur Rahman brought the country’s independence … our aim is that all people of this independent country will live with equal rights and we’re working with this goal,” she said.

Mentioning that autism or disability is not a disease or sickness, Sheikh Hasina said her government is making strides so that those suffering from autism and disabilities can live together with the mainstream people of the society.

“We know that it’s a huge painful matter for the parents whose children are suffering from such disabilities and we’ve taken various initiatives and programmes to remove their these miseries,” she said.

Highlighting the country’s tremendous socioeconomic development, the premier said her government gives importance to the disabled people in this uplift.

“We want the country’s development and we give importance to the persons with disabilities so that that they don’t remain behind this uplift,” she added.

Elaborating her government’s various steps for the welfare of the persons with disabilities, the prime minister said the Awami League government, after assuming office in 1996, established the Jatiya Protibondhi Unnayan Foundation in 1999.

“Later, we enacted the Persons with Disabilities Rights and Protection Act 2013, the Neuro Developmental Disability Protection Trust Act, 2013 and the Rehabilitation Council Act 2018 to ensure their rights and safety,” she said.

Sheikh Hasina put emphasis on imparting more training to the disabled people by the Jatiya Protibondhi Unnaayan Foundation so that they don’t need to be dependent on others.

“Not only providing the financial support, they (foundation) could help the persons with disabilities by rendering healthcare facilities and giving training to them,” she said.

The prime minister recalled that after independence, Bangabandhu had allocated huge lands for the social welfare ministry across the country.

“We can establish more institutions in those places and we’ve already directed the ministry to undertake projects at upazila level tracing out their unused and fallow lands,” she said.

Sheikh Hasina said her government has a plan to make arrangements for ensuring various facilities including training, games and sports and even employments for the disabled at the district and upazila levels.

The prime minister said her government has been providing allowance to the disabled people under the social safety net programme. “We’re also giving stipend and scholarships to the students with disabilities,” she said.

Pointing out the success of the disabled boys and girls in various international sports meets, Sheikh Hasina said her government is giving special attention to the games and sports for them.

“We’ll construct a complex for them after passing the project in this regard soon. Besides, we’re developing a place at the Jatiya Sangsad Complex for the disabled children for practicing games and sports there,” she said.

Regarding the demand of turning Jatiya Protibondhi Unnayan Foundation into a directorate, the prime minister said the disabled persons will not be benefited much through it, rather it will benefit some government officers.

“It’s not proper to turn a foundation into a directorate … if the foundation exists, financial donation will come and there are many scopes to work through the foundation,” she said, adding the foundation is very much necessary to render services and create employments at the upazila level.

Senior Secretary of the ministry Zuena Aziz and Jatiya Protibondhi Forum President Sayedul Haque spoke at the function. On behalf of the persons with disabilities, Ferdousi Akhtar, a fifth grade student of National Specialized Education Centre, also addressed it.

Later, the prime minister exchanged pleasantries with the challenged children and witnessed a colourful cultural function performed by the children with disabilities.

Earlier, she distributed awards among the successful persons, social workers and organisations, parents and caregivers to recognise their contributions to the field.