PM for proper use of talents to make quality films 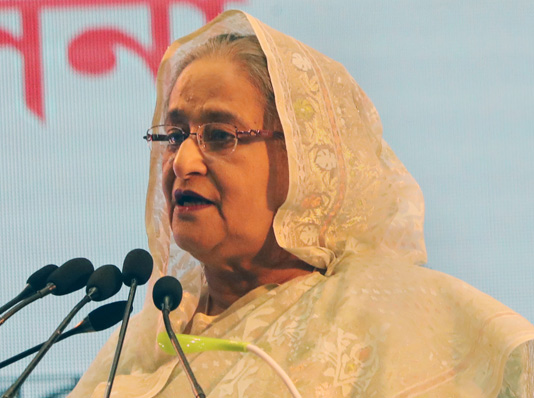 Prime Minister Sheikh Hasina today stressed the need for proper use of talents, particularly in youths, to produce quality films aimed at taking Bangladesh to a dignified position in the international arena.

“We have a plenty of talented people and are ahead of many other countries in comparison to having talents. We would have to secure a dignified position on the world stage by making quality films by proper utilization of the talents,” she said.

The premier asked all concerned to give a special focus on the particular issue while handing over the National Film Award-2017 and 2018 at a ceremony arranged by the Information Ministry at the Bangabandhu International Conference Centre (BICC) here.

In this context, she said the artistes of Bangladesh are doing good jobs after going to the neighbouring country adding, “We would have to do the same or even better to attract other countries towards our films.”

She greeted the award recipients and said the awards were to recognize their good work and inspire them to move ahead.

The prime minister also advocated using the talents, creativity and thoughts inside the youths in making more quality films capitalizing on the modern technology as she described the current time a digital one.

To this end, she said that Bangladesh is now a digital country as it has already launched Bangabandhu Satellite-1 and is taking preparation to launch the second one.

Appreciating the youth for coming to the film arena, she called upon them to take proper training on making quality films from the Bangladesh Television and Film Institute which was set up by her government aimed at flourishing the intellects.

Sheikh Hasina asked the film related people to remain cautious in making films that have the potential of reforming or ruining a society.

“One can get an overview of a society through films, whereas films can reach information easily to the society. It can reform a society while the bad culture (created by the films) even destroys a society also,” she said referring to the ill attempts to destroy the society after assassination of Father of the Nation Bangabandhu Sheikh Mujibur Rahman on August 15 in 1975.

She said after the assassination of Bangabandhu the society was taken to such a situation that the people could not go to cinemas with all their family members.

“—but we have come out of the situation. The interests of the people are increasing as movies are now being made considering the social reformation as well as the wellbeing of the society,” she said after giving thanks to the film related people.

The premier said her government will provide all necessary supports to make the movie houses digitised with all modern facilities at the districts and upazila levels to cope with the changing trends of the world.

“We have to give a special eye on arrangement of better scopes including making cinemas digitalized for amusement as economic solvency and purchasing capacity have been increased of the people up to upazila level,” she said.

Describing the language, literature and culture as priceless assets, she urged all to make movies containing the country’s history, culture and heritage and unique characteristics of Bangladesh which can earn global appreciation.

The premier recalled the contribution of Bangabandhu to film development and said Bangabandhu had first created the scope of making films by a Bangalee in Bangladesh as he placed the bill titled “East Pakistan Film Development Corporation” in the parliament and it was passed.

Sheikh Hasina said that Bangabandhu had created the Bangladesh Film Development Corporation (BFDC) and took other necessary measures for the overall development of film.

But after the assassination of Bangabandhu in 1975, she said, the voice of art and culture of Bangalees was gagged and propaganda was carried out by distorting the history of independence.

The prime minister said the post-75 illegitimate governments made ill efforts to ruin the film industry and as a result the industry was on the verge of destruction.

Describing the film as a strong medium, Sheikh Hasina said that it is quite possible to bring positive change in the mindset of the people making proper use of the medium.

“Films can inspire people to follow the good path with depicting the positive sides of the society,” she said.

The premier asked the film makers to produce more life-oriented films which help expose the inner beauty of the people and keep them away from narcotics, terrorism, militancy, and corruption as the drives alone will not suffice to stop the menace.

Elaborating her government’s steps for development of the film industry, Sheikh Hasina said the government has implemented massive programmes for developing the industry.

The premier added: “We have formulated the National Film Policy-2017 to give importance on producing artistic and creative films while Joint-Venture Film Policy-2017 has been adopted to flourish the film industry and encourage joint investment. Six joint-venture films have got government approval during the FY 2018-19.”

She said a task force has been formed to oversee whether censor of the films is being done following the respective laws and rules aimed at effectively protecting the movies from bad culture, nudity and degradation of social values.

“The process of enacting a certification law on the basis of rating system is going on to cope with the world trend,” she said, adding that the work of the first phase of Bangabandu Film City in Kaliakair has already been completed while the work of its second phase will start soon.

She continued that the work on building BFDC Complex at a cost of Taka 323 crore is now going on while the project on modernization and extension of BFDC has already been completed.

The premier said that the Bangladesh Film Archive Bhaban has been built accommodating all modern facilities to preserve the old films and thus preserve the history and culture of the country.

She also said that the 16-storey modern Tothya Bhaban was built at a cost of Taka 104.12 croe (Information Bhaban) while the Press Institute of Bangladesh and the National Institute of Mass Communication have been expanded.

Bangabandhu’s life to be screened in BBPL opening ceremony