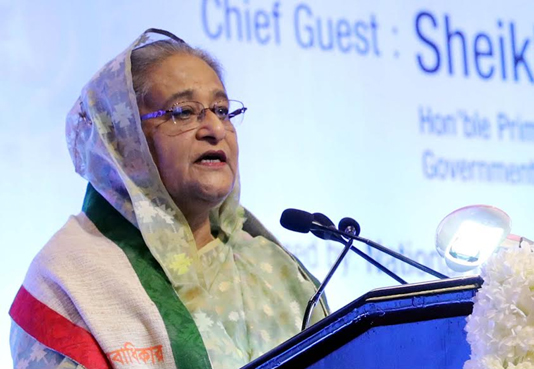 Prime Minister Sheikh Hasina today said the government has been working to uphold the rule of law to protect human rights in the country, stressing the need for creating mass awareness about citizens’ duty and rights.

“We will have to let know the countrymen about the human rights and citizens’ duty as rights and duty are complementary to each other. One’s duty is another’s right and in contrary one’s right is another’s duty,” she said. The prime minister was addressing as the chief guest a program marking the Human Rights Day-2019.

The National Human Rights Commission (NHRC) organized the event at a city hotel in assistance with UNDP’s human rights programme with the theme of “Youth standing up for the human rights”.

The premier said the NHRC could play a significant role in making people
aware of citizens’ duty and their rights to protect human rights.

Describing the rule of law as the most required thing to protect human
rights, Sheikh Hasina said, “We have been working to maintain the rule of
law. So, the criminals whoever they might be would have to face punishment.”

The premier said her government has been taking various measures to protect
the human rights of all irrespective classes and professions.

Alongside protecting the human rights, the prime minister said the ongoing
drives against terrorism, militancy, narcotics and corruption will be
continued, adding, “We have to prevent social menaces as these menaces can
destroy the society.”

Human Rights Day is observed by the international community on 10 December
every year. It commemorates the day in 1948, when the United Nations General
Assembly adopted the Universal Declaration of Human Rights.

Sheikh Hasina said, “We want to maintain the rule of law by holding trials
of all the human rights violation.”

She added that the human rights protection means not only the protection of
the people physically, but also fulfilling their basic rights, for which her
government has been working.

“None will remain homeless as well as hungry. All will get education,
clothes and treatment, as Bangabandhu wanted to build a Sonar Bangla free
from poverty and hunger,” she said.

Regarding Rohingya issue, the premier said that “We didn’t engage in clash
with Myanmar rather holding talks as it (Myanmar) takes initiative to bring
back their nationals”.

“We have given shelters to the Rohingyas on humanitarian ground as we
encountered similar experience during the War of Liberation,” she said.

Over 11 lakh Rohingyas have taken shelter in Bangladesh, the premier said,
adding that they (Rohingyas) came to Bangladesh in large numbers in 2017 after facing
inhuman torture in Myanmar that Bangladeshis had to face in 1971.

In this context, the premier recalled that over one crore people took
shelter in India as refugee during the Liberation War.

Sheikh Hasina said the passing of indemnity bill for scraping the trial of
the killers of Father of the Nation Bangabandhu Sheikh Mujibur Rahman and
most of his family members was a clear violation of the human rights.

“The most sorrowful matter was that the killers had shown arrogance
announcing that their trial will not be held,” she added.

The killers were not only awarded jobs in mission abroad but also
rehabilitated them in politics, she said, adding that one of the killers was
made oposition leader of the parliament while another contested in the presidential
election.

The premier said, “After assuming office, we had initiated the trial of
Bangabandhu killing following cancelling the indemnity bill and accomplished
it.”

Mentioning that Bangabandhu had started the trial of the war criminals
soon after the independence, but, the prime minister said “After the killing
of the Father of the Nation in 1975, Ziaur Rahman stopped the trial”.

The culture of impunity for human rights violations had started after the
assassination of Bangabandhu as Ziaur Rahman killed thousands of people in
the name of coups, she said, adding, that’s why, the people of the country
had to go through the pain for 29 years.

“After assuming office, we have brought human rights violators under trial
as no incident of human right violation happens in the future,” she said.

As a part of the move, the premier said her government completed the trial
of the killers of Bangabandhu and also initiated trials of the war criminals.

Referring to disposing of some recent sensational cases in the country at
the quickest possible time, Sheikh Hasina said her government was well aware
of violation of the human rights.

“We have been playing proactive role in case of any human rights violation
in the recent time as we regard the government as the servant of the people,”
she said.

Describing this year’s theme-“Youth standing up for the human rights” is
time befitting, Sheikh Hasina said youths are the future of the nation as
they will move the country as well as the effort for protecting the human
rights forward.

Stating that Bangladesh has secured membership in the UN Human Rights
Council for three times, the prime minister said her government has signed
and ratified various international conventions to protect the human rights of
women, children, labourer and physically challenged people.

Referring to the Awami League government’s commitment to safeguarding the
human rights of the country’s people, the premier said her government enacted
the National Human Rights Commission Act in 2009.

The government has been working to strengthen the National Human Rights
Commission as per the electoral pledge and implementing its recommendations
to protect human rights, she said.