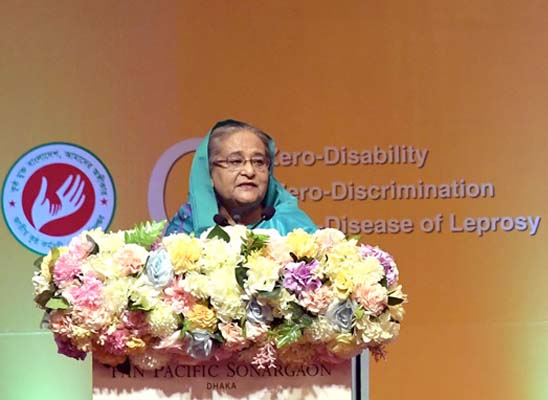 Prime Minister Sheikh Hasina today vowed to eliminate leprosy from the country before the target of 2030, urging local pharmaceutical companies to produce medicines for the leprosy patients and distribute those free to help achieve the goal.

“There are many pharmaceutical companies in our country which export
medicines to different countries of the world and the quality of their
medicines is very high,” she said.

“So, I would like to request them to produce the specialised medicines that
are needed for the leprosy patients and make arrangements to distribute those
among the patients free of cost and thus they can help reach our goal fast,”
Sheikh Hasina said.

The prime minister said this while inaugurating the National Conference-
2019 on “Zero Leprosy Initiative by 2030” at Pan Pacific Sonargaon Hotel here
this morning.

She simultaneously called upon all concerned including health department
officials and field-level staffs to strengthen the national leprosy
activities to build a leprosy-free Bangladesh before 2030.

“I believe that we could build a leprosy-free Bangladesh much before the
target 2030, if we all work sincerely in this regard,” she said.

Terming the persons suffering from leprosy as a part of the society, the
prime minister urged the people to treat them with humanitarian outlook.

“I will like to tell the people that they’re a part of our society. So it’s
not proper to push them away. If anybody is diagnosed with leprosy, you’ll
have to treat him or her with sympathy and make arrangements for treatment so
he or she could be cured … it’s very much necessary,” she said.

Health Minister Zahid Maleque presided over the function, while Chairman of
the Parliamentary Standing Committee on the Health and Family Welfare
Ministry Sheikh Fazlul Karim Selim and Chairman of the Nippon Foundation of
Japan and WHO Goodwill Ambassador Yohei Sasakawa were present as the special
guests.

A documentary on overall situation of the leprosy disease and its treatment
was screened at the function.

The prime minister advised the physicians and other concerned to take steps
so that the disease of leprosy patients is detected at the primary stage. “If
they are diagnosed with the disease at the preliminary stage, they could be
cured fast and will not be crippled,” she said.

Sheikh Hasina said that there is no alternative to employment for ensuring
development of all persons with disabilities for leprosy.

“People affected with leprosy must not be sacked from a job, rather a
conducive working environment for the disabled people must be created,” she said.

Referring to her government’s strides to build a leprosy-free country, the
prime minister said her government after assuming office in 1996 took
different programmes to root out the disease.

“We had seen the good results of our initiatives as we had been able to
bring down the number of leprosy patient to one in every 10,000 population by
1998. It means that we could achieve the MDG in 1998 instead of 2000,” she
said.

Sheikh Hasina said the number of leprosy patients is higher in some areas
of the country including North Bengal and Chattogram Hill Tracts region.
“We’ve to focus on those areas and make arrangements for the treatment of the
leprosy patients alongside creating awareness,” she said.

“If we can do this, we could build a leprosy-free country much before 2030
Insha Allah,” she said.

Sheikh Hasina said in 1985, a total of 35.58 percent of leprosy diagnosed
patients used to come to the hospitals for treatments with disability.

“But, this ratio has fallen into less than eight percent,” she said,
adding that it is one of the big successes of her government.

The premier said now her government wants to bring this rate down to zero
with united efforts by all the government and non-government organizations.

Sheikh Hasina said in order to help people enjoy basic rights through
eliminating social discrimination against leprosy, her government in 2011 has
repealed the age-old law enacted by the British government regarding the
leprosy-affected people.

“It’s not a matter to keep the leprosy patients in any house like a prison
cell … arrangement for better treatment for them will have to be made.
They’ll have to be recognized that they’re a part of the society and whatever
is necessary will have to be done so they could be recovered from the
disease,” the premier said.

“We’ll also have to see that none is freshly attacked by the disease …
it’s very much necessary to create awareness to this end and we’re giving
attention to this,” she continued.

The premier said around 3,500 to 4,000 leprosy affected people are
identified in Bangladesh every year and all of them receive free treatment
and medicines from the upazila sadar and leprosy hospitals.

Sheikh Hasina said her government has specific commitments for the persons
with disabilities. “We don’t push the physically challenged people away as
the disabled … they’ve also a right to live with dignity and we’ve ensured
it,” she said.

“All will have to be taught from their childhood not to call the ‘kanake
kana and khorake khora’ (blinds as the blinds and the crippled as the
crippled),” she said.

The premier said the government has taken special initiatives by adopting,
modernizing and implementing laws for disabled persons, chalking out special
programmes on education, employment and transport accessibility for the
differently abled persons.

Sheikh Hasina said after assuming office in 1996, she immediately directed
the authorities concerned to take special housing projects for the disabled
persons caused due to leprosy.

‘Bandhabari Ashrayan Project’ implemented at Boali union of Kaliakair
upazila in Gazipur district is the outcome of that directives, she said.

The prime minister extended special thanks to all the non-government
organizations, who initiated leprosy elimination activities in Bangladesh,
for their continued efforts and services to the community as well as leprosy
patients.

“Nowadays people are well aware of leprosy in Bangladesh. This awareness
has been raised due to continuous publicity campaigns by our government and
the NGOs,” she said.

Sheikh Hasina said there are three specialized government hospitals in
Dhaka, Sylhet and Nilphamari districts that deliver treatments and support to
leprosy-affected persons.

“Moreover, a number of non-government organizations with the assistance of
donor countries are conducting leprosy hospitals and other activities in
various districts in a bid to eradicate the disease,” she said.

The prime minister said due to adoption of health and Social Safety Net
Protection Programmes by the present government, significant progress has
been made in this sector.

In addition, she said, the quality and area of health care have been improved notably, and significant success has been achieved in controlling infectious diseases, and immunization programmes. “We have been able to completely eradicate diseases like polio, measles, and rubella, among others,” she said.