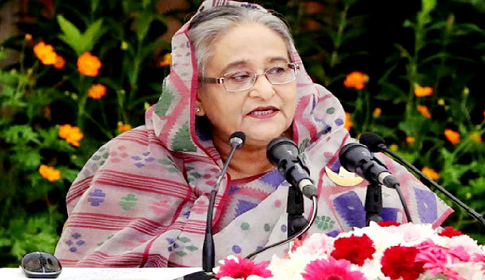 Prime Minister Sheikh Hasina today asked all public servants including fresh officials of the administration to stay alert about corruption and bribery and properly use the public money in the country’s development.

“All will have to remain careful about graft and bribery as these menaces many times destroy our society and activities. So you’ll have to create mass awareness about the menaces,” she said. The prime minister was addressing the closing and certificate-giving ceremony of the 113th, 114th and 115th BCS Administration and Law Courses at BCS Administration Academy in the capital this morning.

“I’ll tell the fresh officers of the administration that we’re developing
the country due to the tax of the people and hard labour of the farmers and
workers,” the premier said.

“So, you’ll have to give special attention so that their money is properly
utilised for the uplift and the development is made in a planned way and with
economically (mitabayita),” she added.

Sheikh Hasina simultaneously urged the fresh officers of the
administration to work with patriotism and dutifulness for further
development of the country.

“You’ll have to keep in mind this country is ours and your children will
live in the country in future … you’ll have to also bear in mind that what
you will leave for the future generations. If you work with this thinking and
spirit, then the country will advance further,” she said.

The prime minister said her government launched drives against corruption,
terrorism and narcotics to root out these social menaces from the country and
directed the fresh officials of the administration to give special attention
in this regard.

She also asked them to work with more innovative ideas, saying that they
can change the face of their area and make its development visible through
their work.

“I know that you can change the face of every union, upazila and district
of the country and make their development visible through your work. So,
you’ll have must that innovative ideas and thinking, sense of love and
dutifulness for the country,” she said.

Referring to Article 7 of the constitution, the prime minister reminded the fresh officials of the administration that the people are the owners of the country.

“We’ve to keep in mind that we’ve responsibilities for those people and we’ll have to work for them … we’ve the dutifulness for our family. Like this, we’ve to work for the people of the country with that thinking and spirit,” she said.

Sheikh Hasina described the oath of the fresh officials as very important and advised them to practice it regularly.

“You’ll have to bear in mind that every sentence of your oath is very important … it’s not for reading only, it’s also for practising and we want you to do it,” she said. “Your responsibilities will increase further when you will enter the big work area at the field level,” she added.

Highlighting her government’s various plans and policies for further development of the country, the prime minister said her government has adopted 10-year perspective plan from 2010-2020.

“We’re now preparing the 20-year perspective plan or strategy paper (2021-2041) considering the future development of the country and today’s fresh officials will be made as senior officials and they’ll have to perform many important tasks at that time. So they’ll have to get themselves ready in that way,” she said.

Pointing out that the strength of honesty is the biggest strength, the prime minister said her government faced the World Bank corruption allegations regarding the Padma Bridge and won the challenge.

“We’ve been able to face the allegations as we were in the honest path. At last, it has been proved and the Canada Federal Could gave verdict that the allegations were completely fake and false … we could not take this challenge if we didn’t move with honesty,” she said.

In this connection, the prime minister said the World Bank had brought these allegations due to provocations of some people of the country.

“Those who instigated the World Bank to bring allegations were benefitted in my hands. I had given the Grameenphone business … I had campaigned much in favour of the Grameen Bank in 1985-86 and my government placed resolutions on its microcredit concept at the United Nations and helped pass it in 1996,” she said.

That person, she said, went to stop World Bank funding on the Padma Bridge for the post of managing director of the Grameen Bank. “My question was that why a person who won the Nobel Prize was so greedy for an MD post of the bank?,” she said.

“There was a law that an MD can stay in his or her post till the age of 60. But that person wanted to remain in the post when he stepped into 71. When Bangladesh Bank barred him from illegally staying in the post, the work of the Padma Bridge was stopped as he was a friend of Hillary Clinton,” she said.

“Our two renowned editors also approached the USA at that time for stopping the World Bank funding for the bridge. I had taken it as a challenge, saying that it will have to be proved where corruption took place.” she said.

The prime minister said the perception of the people of the world has changed due to the government’s one decision to construct the bridge with own funding. “After the decision, they think that Bangladesh can, if it wishes and we could it,” she said.

Sheikh Hasina also elaborated her government’s steps for the welfare of the government employees, saying that her government has increased salary and allowances and gave facilities to them for purchasing cars and flats.

“We’ve also introduced Public Administration Medals for those who will do good work and its aim was we want more work from them for the country and its people, not for me,” she said.