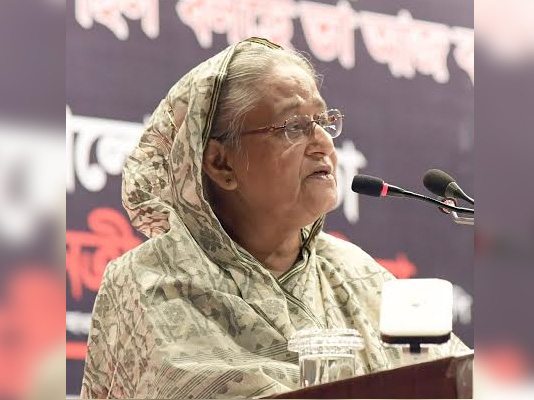 Prime Minister Sheikh Hasina today accused again Ziaur Rahman of his involvement in the killing of Bangabandhu, saying that he (Zia) was the most trusted person of Khandaker Moshtaque.

“Moshtaque promoted Ziaur Rahman as the army chief as Zia was the most trusted person of Moshtaque. If Zia was not involved in the killing of Bangabandhu, why Khandaker Moshtaque made him army chief?” she said.

The prime minister said this while taking part in a discussion at Krishibid Institution, Bangladesh (KIB) Auditorium at Farmgate here this afternoon.

Sheikh Hasina, also the Awami League (AL) president, urged the new generations to advance the country further by upholding independence and stay alert so none can play ducks and drakes with the fate of the people in future.

The premier said the countrymen will have to think that on the soil of Bangladesh, the traitors like Mir Zafar and Khandaker Moshtaque were born and the people like ‘killer Zia’ has come time and again.

Bangladesh Awami League organised the discussion on the occasion of the Martyred Intellectuals Day.

At the outset of the discussion, a minute’s silence was observed as a mark of profound respect to the memories of Father of the Nation Bangabandhu Sheikh Mujibur Rahman and other martyrs of the August 15 carnage, four national leaders, martyrs of the liberation war and martyred intellectuals.

The prime minister said Khandaker Moshtaque had promulgated the infamous indemnity ordinance to stop the trial of the killers of Bangabandhu, while Ziaur Rahman passed the ordinance as a law.

“The distortion of history of the liberation war started when Zia grabbed state power by violating constitution. He also freed war criminals from the jail, rewarded Bangabandhu’s killers and gave scope to Shafiul Alam Pradhan, who was convicted for seven murders, to do politics,” she said.

Sheikh Hasina described the 1974 famine as a manmade one and said the then food secretary Abdul Momen was the mastermind of the famine. “Abdul Momen was made a minister of the Ziaur Rahman cabinet,” she said.

The prime minister said such conspiracies were orchestrated after independence and its reason was to turn Bangladesh again into a province of Pakistan.

She said after the killing of Bangabandhu, the killers had changed the name of Bangladesh as the Islamic Republic of Bangladesh. But they could not hold it as the people didn’t accept it, she said.

“More information will be revealed if you conduct research in this regard … the August 15 killing was not mere a murder, it was committed to foil our victory and destroy the country,” she said.

She said various destructive acts like killing of the public representatives, looting police stations, torching jute godowns were committed after the independence.

Sheikh Hasina said some people at that time criticised the government through their writings.

“But I’m in doubt whether they could realise the terrible situation of the newly independent country … I think they could not realise it or they had somehow any link with anywhere,” she said.

“They could not understand what could be the consequence of the propaganda,” she continued.

Sheikh Hasina said Ziaur Rahman was engaged in many killings and conspiracies. “One after another coup took place during Zia’s military rule and most of the freedom fighter army officers were killed in these coups and the army officers didn’t know what their offence was,” she said.

The prime minister said Bangabandhu’s name was erased from the history at that time, and a false history was created to misguide the people.

“But nobody can erase the truth forever and it has now been proved before the entire world and the people of Bangladesh,” she said.

Sheikh Hasina said the present generation has gotten a scope to know the correct history and asserted that “Insha Allah none will be able to wipe out it in future.”

The prime minister said ill efforts were made to erase the names of the intellectuals who sacrificed their life for the country. “But the attempts did not succeed as self-sacrifice never goes in vain and it has now been proved in Bangladesh,” she said.

Sheikh Hasina said the sacrifice and great contributions of the martyrs will remain ever shining if Bangladesh can move with dignity on the world stage.

“Bangabandhu presented us an independent Bangladesh and the country is advancing and will continue to move further economically and politically,” she said.

The prime minister said the Pakistani occupation forces could not accept their defeat to the Bangalees or surrender to the allied force.

“That’s why they (Pakistani occupation forces) tried to eliminate teachers, journalists, physicians, cultural activists, intellectuals who work to run a state or build a society … and carried out massacre across the country,” she said.

Sheikh Hasina said some black sheep of the country who betrayed the Bangalee nation were the masterminds of these heinous killings. “They showed the path to the Pakistani soldiers and handed over the intellectuals to them and in this way, they wanted to destroy a nation,” she said.

While taking part in the discussion, Shawon Mahmud said: “When I come to any programme of the Awami League, I feel that I’ve come to my home and the people are known to me as the people of surrounding areas.”

“When we see Bangabandhu’s daughter Sheikh Hasina, she is our apa and our children’s friends. There is no such a family anywhere where everybody from the common people calls Sheikh Hasina ‘apa’ and the Father of the Nation father,” she said.

She said there were many miracle people like teachers, musicians, poets, writers in the country who understood after listening to Bangabandhu’s historic March 7 speech that Bangladesh was going to be liberated.

Expressing gratitude to Prime Minister Sheikh Hasina for holding the trial of war criminals to free the country from stigma, she said this has been possible due to her bold and courageous leadership.