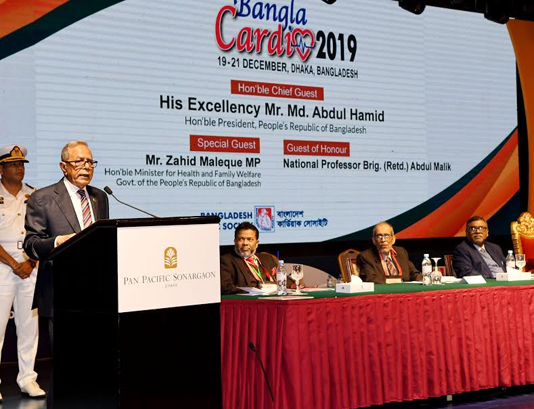 President M Abdul Hamid today came down heavily on those dealing in adulterated and date-expired medicines, asking physicians and other concerned to take special measures to create mass awareness against it.

“Advise the patients, while prescribing, to take medicines seeing the date of expiry . . . I know it will take some time from you but it will be very useful for all,” he told physicians while inaugurating the three-day Bangla Cardiac 2019 Conference at a city hotel here.

The physicians must take preventive measures so that no adulterated and date-expired medicine can enter into the markets, the President added.

The head of the state also asked the government and other concerned to issue a circular directing the pharmacy owners to keep the room’s temperatures suitable for preserving drugs.

“About 95 percent pharmacies don’t maintain the room atmosphere for preserving medicines . . . I think this circular will bring benefits for us,” he stated.

Stressing on enhancing vigilance on pharmacists in this connection, the President also said the physicians will prescribe the medicines for patients while the pharmacists will suggest the quality of medicines.

Abdul Hamid also directed the doctors not to take extra money from the patients in the name of unnecessary medical tests at different hospitals and clinics across the country.

Some renowned hospitals as well as clinics in Dhaka and some other parts in rural areas are allegedly involved in misdeeds in the name of treatment, he mentioned.

Saying that misdeeds of one physician ultimately go to the shoulders of the whole community, Abdul Hamid said this creates lack of confidence among the doctors and the patients. He stressed the need for taking exemplary punishment against the responsible persons and institutions as well.

President Hamid called upon the physicians to be more careful in performing respective professional duties and not to misuse their professional reputation for serving their personal purposes only.

Referring to purchasing modern and developed medical equipment for hospitals, the President asked the health minister and others concerned to ensure transparency and accountability in buying those.

President Hamid put emphasis on creating mass awareness about the heart disease, saying that as treatment for cardiovascular diseases is very costly, priority should be given to the awareness building campaign.

This campaign will help save many lives from the premature deaths, the President hoped.

President Hamid extended his sincere thanks to all guest speakers and faculties who have taken interest in attending this conference and made it successful, terming the deliberations of the BanglaCardio-2019 as an excellent opportunity for the cardiologists and cardiac surgeons from home and abroad to exchange their views and experiences on recent advancement in Cardiovascular Science.